There it Goes! A Long Drive! If It Stays Fair... Home Run!

I was the first girl in my Little League to hit a home run. I did it on Opening Day.

Yet the main thing I remember from that day was that my mom (who came to every one of my games) wasn’t watching when it happened. This sticks in my mind not because I was sad, disappointed or upset, but because I thought it was funny. It’s absolutely perfect and makes complete sense. She’s a talker. A socializer. She was turned around talking to another parent when they kindly interrupted her to point out, “Uh, hey, your daughter just hit a home run.” You would have thought the cheering (I’ll just assume the entire place went nuts) would have gotten her to turn around to see what was going on. Nope. Too deep in conversation. I hope it was worth it, Mom, because I'm scarred for life! That must be why I was drawn to comedy.

I will give her this, at least she had the balls to tell me the truth and not pretend like she witnessed it. I can pretty much guarantee my reaction was the equivalent of the facepalm emoji. To be honest, I wouldn’t have it any other way. We wouldn't know it at the time, but turns out she’d see me hit many, many more home runs in my baseball and softball careers, so I guess we’re good.

There wasn’t much fanfare on that spring afternoon. I probably got a banana split after the game, which is shocking that I can’t recall that in vivid detail. The ball sailed past the left field fence, down the foul line. I always was a pull hitter. I do know my teammates stormed home plate, and quite honestly, I’m not even sure if I touched it. This was before the days of everyone clearing the way so the umpire can see the foot hit the plate and officially count the run. I also don’t know if that run actually meant anything. It was the 6th inning (top? bottom? who knows) and the 6th run scored for our team so we were either winning or losing by enough to make it (the run, not the moment) inconsequential.

What I do know is that it reinforced (to me) that I could play baseball. I may have only been allowed to play the league required minimum of 3 innings and 1 at bat for most of my Little League career, but I proved that if I had been given more chances, maybe I could have hit a few more dingers. I guess we’ll never know.

As a humble trailblazer is wont to do, I like to hold my self-worth in high regard and think that I paved the way for future girls in the league to maybe be given more of a chance and get a few more at bats. I know this much, the following season when I had aged out of the league my female counterpart, and soon-to-be softball teammate, hit 2 home runs thereby doubling my previously set record! Well, they say records are made to be broken. It would have been nice to hold on to that one for a little longer, yeesh.

You would think with a substantial moment like this the details would be so perfectly etched in my mind. That in reality I had my very own Carlton Fisk moment of waving the ball to stay fair. Other than the details I already provided, I got nothing. What really sticks with me are the little things I experienced, both good and bad.

These major milestones are just that, milestones. Markers that something really great happened at some point in time which propelled me forward to create the next marker and so on. I guess that's what life is all about. 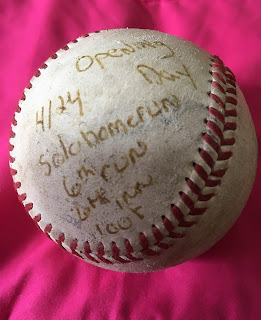 What's a milestone event in your sports career that your parent(s) conveniently missed? Share in the comments below.

Bob Seger Has Nothing To Do With These Silver Bullets